"There was one peculiarity of Kipling... namely the amount of ink which he used to throw about... He had a habit of dipping his pen, frequently and deep into the ink-pot, and as all his movements were abrupt, almost jerky, the ink used to fly", remembers Charles Cecil. Rudyard Kipling later developed into a "spruce, well-groomed little figure" but he was always particular about his writing supplies. 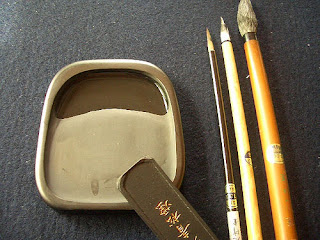 Kipling used black ink and liked India ink (or Indian ink) in particular. "The magic lies in the Brush and the Ink", he wrote. He had a noted  preference for the "blackest" of inks and could not abide with any "blue-blacks", and as for vermilion he "never found a bottled vermilion fit to rubricate initials when one hung in the wind waiting". India ink (or Chinese ink, for this ink has a Chinese origin) was a mixture of glue, tar, pitch and bone black pigment and often came in solid forms (Chinese sticks). When living with his parents Kipling kept an ink-boy to grind him Indian ink.

To use the ground, dry Indian ink, a wet brush was required to make a liquid mixture. "Bottled ink is not to compare with the ground Chinese stick", wrote Kipling. And such an ink was essential to the process of his writing and editing his stories. Kipling used "well-ground Indian ink" and a "camel-hair brush" to edit his writing: "The shorter the tale, the longer the brushwork... The magic lies in the Brush and Ink". Read your final draft, consider faithfully every paragraph, sentence and word, blacking out the parts that would not do: "when thou has done, repent none". 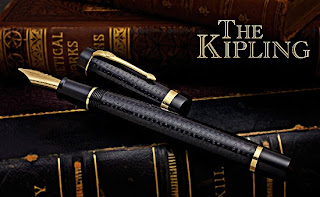 
Judging from his being described as "well-groomed", Kipling's writing and editing techniques using brush and ink must have improved for in the early years of his writing career he went around spotted with ink "like a Dalmatian dog".
on November 25, 2009