If one posed the question "pen or pencil" to Johann Wolfgang von Goethe, the celebrated author of Faustus would have replied "pencil". While others reached for the pen holder, the nib and the ink pot, Goethe (1749-1832), one of the key figures of German literature, had a noted preference for the humble pencil. 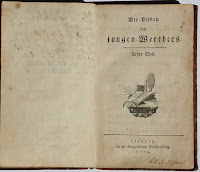 Goethe's Die Leiden des jungen Werthers or The Sorrows of Young Werther, 1774, said to be the world's first bestseller.

In his autobiography, Goethe acknowledges his "indwelling poetic gift" which flourished mostly in a spontaneous, even involuntary way. Writing inspiration often came during the night and the German author wished that he could be accustomed to writing in the dark "so as to be able to fix down at once all such unpremeditated effusions". When inspiration grabbed him he would rush to the desk and start writing the poem he had already composed in his head, from start to finish: "and as I could not spare time to adjust my paper, however, obliquely it might lie, the lines often crossed it diagonically".

Why pencil over a pen? In his autobiography, Johann Wolfgang von Goethe explains that when writing inspiration got hold of him and he had to express onto paper the verses roaming in his head


I liked best to get hold of a lead pencil, because I could write most readily with it; whereas the scratching and spluttering of the pen would sometimes wake me from my somnambular poetizing, confuse me, and stifle a little conception in its birth. For the poems thus created I had a particular reverence.

The Faber Castell website suggests that pencil was none other than a Faber.