"As far back as I remember myself", writes Nabokov in his autobiographical Speak Memory, "I have been subject to mild hallucinations". Before sleep or during one of numerous childhood illnesses, Nabokov would experience aural or visual hallucinations which, coupled with his coloured vision, made him a child with peculiar sensitivities.

His mother, Elena Ivanovna Nabokov, would cultivate those by painting several aquarelles for her son and indulging him in the wonder of her jewels "hardly inferior in mystery and enchantment to the illumination in the city during imperial fetes": sapphires, emeralds and rubies, produced from a secret compartment of her dressing room for young Vladimir's bedtime amusement. 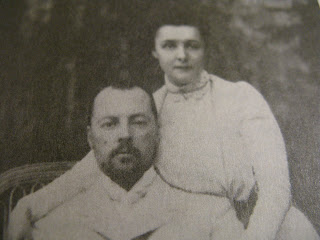 In his numerous childhood illnesses Vladimir Nabokov, a mathematical child prodigy, would feel "enormous spheres and huge numbers swell relentlessly in [his] aching brain" and in his delirium tried to explain them to his mother who understood his sensations as if she had known them herself.

Still in bed and convalescing from one of those long illnesses and knowing that his mother has gone to buy him a present, Vladimir found himself in an "unusual state of euphoria and repose... a strangely translucent state" from within which he visualised all that his mother was doing. He saw her driving down Morskaya Street in a sleigh, heard the horse's snorting breath, saw the coachman in his heavy blue robe, his watch - 20 minutes past two - the muff his mother raised to her face as the sleigh gained speed.

She stopped at Treumann's writing implements and came out with her purchase - a pencil - carried by the footman.

I was astonished that she did not carry so small an object herself and this disagreeable question of dimensions caused a faint renewal, fortunately very brief, of the "mind dilation effect" which I hoped had gone with the fever. ... A few minutes later, she entered the room. In her arms she held a big parcel. It had been in my vision, greatly reduced in size - perhaps, because I subliminally corrected what logic warned me might still be the dreaded remnants of delirium's dilating world. 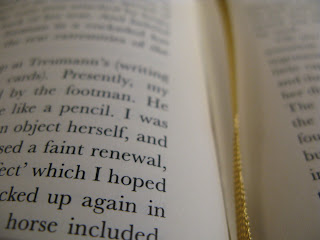 Now the object proved to be a giant polygonal Faber pencil, four feet long and correspondingly thick. It had been hanging as a showpiece in the shop's window, and she presumed I had coveted it, as I coveted all things that were quite purchasable. ... For an awful moment, I wondered whether the point was made of real graphite. It was. And some years later I satisfied myself, by drilling a hole in the side, that the lead went right through the whole length - a perfect case of art for art's sake on the part of Faber and Dr Libner since the pencil was far too big for use and, indeed, was not meant to be used.


It is tempting to offer various Freudian interpretations to the story. Indeed all the psychoanalytical ingredients or favourite psychoanalytical objects are there: childhood, visions, swellings, long pencils and the potent figure of the mother. But Nabokov had an aversion to Freud: "I reject completely the vulgar, shabby, fundamentally medieval world of Freud, with its crankish quest for sexual symbols", he wrote. It is like "searching for Baconian acrostics in Shakespeare's works".