A celebrity virtuoso Franz Liszt toured Europe in the 1840s to perform before almost delirious audiences. Heinrich Heine spoke of "Lisztomania": women scrambled for a lock of his hair, broken strings from his piano, shreds of his velvet gloves. He was sought after by all the famous salons and his concerts were attended by royals. And he was awarded accordingly. 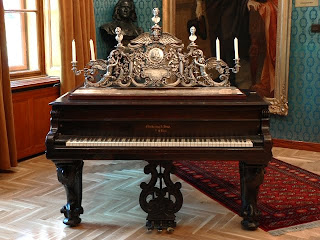 Franz Liszt's Chickering piano. Courtesy of the Franz Liszt Museum.
Liszt's rich and powerful fans showered him with gifts: from his Chickering piano ("the most perfect, most sonorous... among those made in the Austrian Empire and beyond") given to him by Chickering himself to his collection of gold and silver batons, Liszt was bestowed with the best of everything. Including inkstands. And the inkstand followed him from the height of his virtuoso career to his retreat in the Oratory of Madonna del Rosario in Rome.
Aladdin's Cave


"His table is beautifully fitted with things that match", wrote Ludwig Nohl of Liszt in 1884. "Everything is in bronze - inkstand, paper weight, matchbox, etc. and there is always a lighted candle standing on it by which the gentlement can light their cigars". Inkstands had also pride of place in Aladdin's Cave, the special cabinet when Liszt's famous mistress kept her lover's status symbols.
Two years after Liszt met Princess Carolyne Sayn-Wittgenstein at a Kiev concert in 1847, he moved in with her in Altenburg, Weimar at a property rented from the Grand Duchess Maria Pavlovna, the sister of Tsar Nicholas I of Russia. There the Princess created a trophy room, "le cabinet vert", an Aladdin's cave where all of Liszt precious gifts were displayed to dazzling effect: expensive rings, gold boxes set with diamonds, gold and silver batons, a solid-silver writing desk and a "large platinum inkstand with figures in relief".
In the catalogued collection of the Franz Liszt Museum in Budapest there are three inkstands that belong to the famous Hungarian composer: a bronze one decorated with fruit and foliage; a cubiform ink stand with cut edges of clear glass and a third one with an inscription commemorating 50 years of Liszt's artistic career dating from 1873. The latter one comprises an engraved silver tray with four legs with a small sculpture of a date palm in the middle. 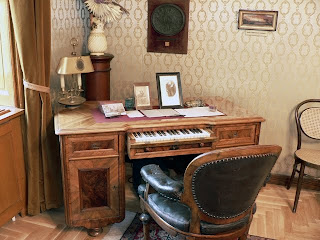 Franz Liszt composing desk. Courtesy of the Franz Liszt Museum
An inkpot made by Fabergé between 1842-1870 in St. Petersburg is described as made of platinum and glass, cubiform, cast and chiselled with a lid featuring a large turquoise with gold inlay and Turkish characters in the middle. The inkpot is decorated with Baroque foliate ornaments and bears Liszt's coat of arms on the front side (Liszt had been awarded by Emperor Franz Joseph the Iron Crown, the lowest order of Austrian nobility, and thus had the right to apply for coats-of-arms).
The Museum collection holds also a "Persian or Turkish" travelling inkpot and pen case made of copper; and travelling writing box made of carved pear-wood. 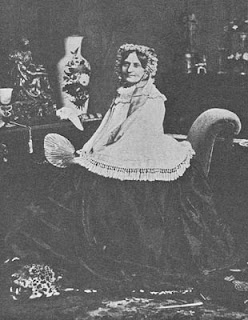 
Caroline wanted Liszt to stop performing and concentrate on composing. It was probably her that gave him a gold propelling pencil inscribed with her name. A symbolic gesture perhaps: "use your hands to write not to play". The Princess was already married and the Vatican did not grant her the possibility for a new marriage.
When the Princess's husband died in 1864, the desire to marry has left them. Although Franz and Caroline continued to keep in touch, they decided living apart was for the best. Liszt was already in retreat in the Oratory of the Madonna del Rosario. There would be no more Aladdin's cave or "green cabinet". Asked about his intentions Liszt replied:

"everything I could wish for being contained in my inkstand, and the inkstand being where it could be better placed, in the custody of the Madonna del Rosario at Rome". 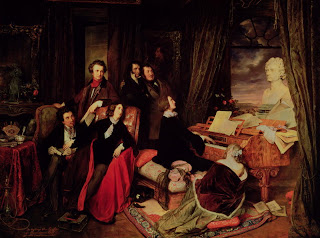