Today the wealthy cannot be seen without a Mont Blanc or Yard-O-Led pencil. In Roman times they couldn't do without a decorated stylus. Used to write on wax tablets, a Roman stylus was a metal writing instrument, mostly plain with a pointed tip and a flattened end for erasing. A stylus was usually made out of bronze or iron but not so for the higher echelons of Roman society.

A Mont Blanc of a Roman Stylus, the instrument discovered in the Balkans is made of iron and silver and featuring a silver border and a gold centre surrounded by a silver crescent. Styli continued to be made well into the Middle Ages until the stylus was replaced by the quill, ink pen, pencil and fountain pen.

The Nintendo stylus is not very dissimilar to its Roman ancestor but now the wax is replaced by an LED screen and there is no need for erasing. The principle is the same though. An instrument that makes eraseable marks. Back to basics (with a twist).

A Christmas stocking filler par excellence, the Stylus Pens by Nintendo DS are not your normal styli. The force will definetely be with you with the three Star Wars lightsabers. It took some time but Star Wars finally met the Roman Stylus. Depending on your mood, you can be Yoda (Green lightsaber), Darth Vader (red) or even Anakin/Luke Skywalker. 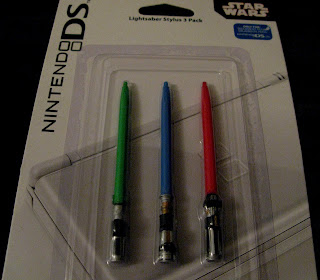 
May the Force Be With You and Happy Holidays.

Email ThisBlogThis!Share to TwitterShare to FacebookShare to Pinterest
Labels: Stylus