How to Improve your Handwriting: Talk to Monsieur Loubens

"Hail to the Professor of Belles-Lettres", Abbé d' Andrezel, a friend of George Sand's grandmother, would exclaim on seeing the Master of Calligraphy. George Sand was educated in her grandmother's estate in the dreaded Deschartres' room, "a room very neatly kept, to be sure, but in which the odor of lavender soap reigned so completely as to finally make me nauseous". The writing master's name was Monsieur Loubens, "a most prententious teacher, capable of ruining the best handwriting with his method". 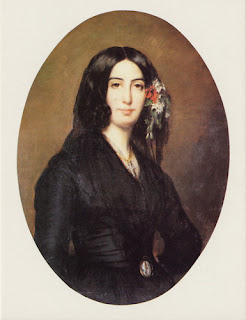 George Sand (1804-1876) by  Auguste Charpentier (1838)
In her autobiography George Sand details Monsieur Loubens method of "how to improve your handwriting" which entailed the use of a series of contraptions - better described as instruments of torture - to ensure that the unfortunate pupil maintained a certain posture "as if writing were some kind of choreographed mime". The head should be kept straight, the elbows loose, three fingers stretched out to the pen, little finger extended onto paper to support the weight of the hand. 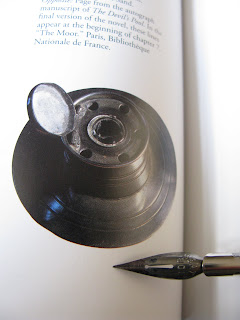 George Sand's Inkwell. Collection Christian Sand.
From Belles Lettres. Manuscripts by the Masters of French Literature, NewYork: Abrahms 2001
To ensure that these four rules of handwriting were followed, Monsieur Loubens made the children wear a sort of crown made of whalebone at the back of which a belt was attached to form a strap (to keep head and shoulder in place). A wooden bar was screwed at the table to keep the elbow in place. A lead ring was soldered to a smaller ring where the pen was slipped. Finally a kind of boxwood pediment with notches and little wheels on it was used to keep the hand and little finger in position. M. Loubens provided also the pens, pencils and rulers (only those would do).

At first we found all these invention hilarious, but after five minutes of trying them out, we acknowledged that it was really agony, that our fingers were being paralyzed, our arms stiffened, and the headband caused migraines. Our complaints went unheeded, and we were only rid of M. Loubens after he had succeeded in rendering us entirely illegible. 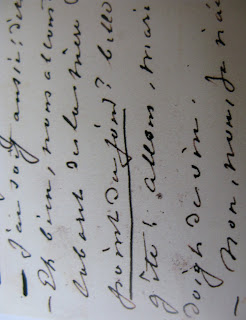 George Sand handwriting.
From Belles Lettres. Manuscripts by the Masters of French Literature, NewYork: Abrahms 2001
The Abbé would comment later:

Good God! If we really taught belle-lettres with the aid of collars, straight-jackets, and iron rings - in the Louben's style - how many fewer men of letters we would have, and how many more pedants!

All quotes from The Autobiography of George Sand. A group translation. Edited by Thelma Jurgrau , State University of New York 1991. Read on George Sand's cricket here.
on January 25, 2010