Writing Implements as Talismans: George Sand and her Cricket

I have written about writing implements as talismans before. Charles Dickens had his china monkey, Thomas Edison his custom-made pencil, Ernest Hemingway a horse chestnut and a rabbit's foot, Rudyard Kipling an array of objects he called his "little fetishes". Flicking through George Sand's autobiography I discover the author's special "writing implement": a cricket. 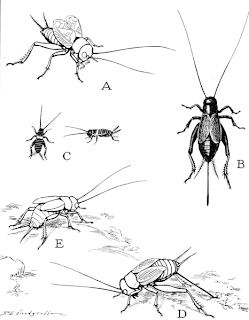 Crickets from
R. E. Snodgrass, Insects. Their Way and Means of Living,
New York Smithosian Institution Series, 1930
Writing in her grandmother's former boudoir, a space so small there was no place for a bed, George Sand was surrounded by her books, her herbarium, her butterflies and her pebbles. There was only one door. From the adjoining bedroom she could hear the breaths of her two sleeping children.

My desk was in an armoire that opened like a secretary, and that a cricket I called Cricri, whom my presence had tamed, occupied for a long time as well. He lived there on my sealing wafers, which I took care to choose in white, for fear he might poison himself. He came to nibble on my paper while I was writing, after which he would go sing in a favorite drawer. Sometimes he walked over my handwriting, and I was obliged to drive him off so that he would not take it into his head to taste the fresh ink. 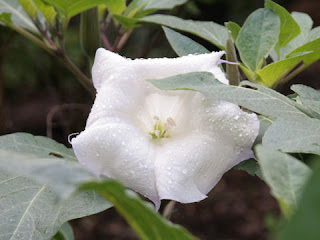 A Datura flower. Photo by Shu Suehiro
Cricri died a tragic death when the serving woman crushed him between casement window and frame. George Sand "enshrouded" the cricket's "sad remains" in a datura flower and kept them for a long time as a relic. Not only did the cricket accompanied Sand during her writings but its death came to symbolise the end of her "poetic love affair".


I imagined in spite of myself that the cricket's little cry, which is, so to speak, the very voice of the domestic hearth, could have swung my real happiness, that it had at least soothed the last disclosures of a sweet illustion and flown off forever with it. The death of the cricket therefore marked, in a symbolic manner, the end of my sojourn at Nohant. I drew my inspiration from other thoughts; I changed my way of life.

All quotes from The Autobiography of George Sand. A group translation. Edited by Thelma Jurgrau , State University of New York 1991. On writing implements of Dickens, Kipling, Edison, Hemingway see the Rabbit's Foot.

Datura ~ belongs to the classic "witches' weeds" which contain hallucinogens. It has a long history of use for causing delirious states and death. It was well known as an essential ingredient of love potions and witches' brews. From Preissel, Brugmansia and Datura. Buffalo and NY 2002. 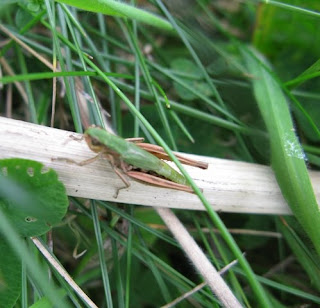