What was Roland Barthes relationship to writing instruments? The French literary critic had a passion for pens and inks. In an interview to Le Monde in September 1973 he revealed:


I would say (...) that I have an almost obsessive relation to writing instruments. I often switch from one pen to another just for the pleasure of it. I try out new ones. Besides, I have far too many pens - I don't know what to do with all of them. And yet, as soon as I see them, I start craving them. I cannot keep myself from buying them. 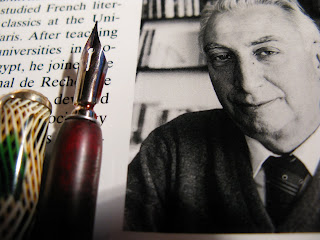 When felt-tipped pens first appeared in stores, I loved them a lot. (...) Since then I've become tired of them, because the point flattens out too quickly. I've also used nibs - not the "Sergeant-Major", which is too dry, but softer nibs, like the "J". In short I've tried everything... except Bics, with which I feel absolutely no affinity. I would even say, a bit nastily, that there is a "Bic style", which is really just for churning out cheap copy, writing that merely transcribes thoughts.


In the end, I always return to fine ink pens. The essential thing is that they can produce that soft, smooth writing I absolutely hold dear. 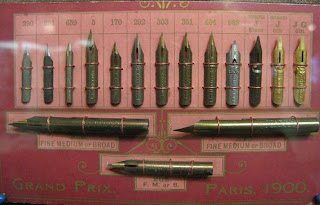 J nibs (second and third from the right) by Guillott