No other writing instrument exemplifies the 1970s for me better than Bic. In the world of school supplies in 1970s Athens there were four options: Blue Bic; Red Bic; Black Bic; Green Bic. Black Bic for serious business. Red Bic for teachers. Green Bic for variety. Blue Bic for the people. A Bic was a Stylo, it was called a Stylo and it was the Stylo. I remember them as clear, hard plastic polygonal tubes enclosing thin, bendable ink holders that ended in a dull-golden tip. I am not sure. Memory does not serve me well these days.

The cap was designed to make sure a Bic stayed upright in one's shirt pocket. No Greek pupil worth the name and reputation would be seen with one sticking out of their pockets. Hell, we didn't even have pockets. The caps were often lost or chewed to destruction, their pointy bit used to extract, oh I don't know, stuff from places. Endless were the trials and tribulations of Bics, the school writing instruments par excellence. Bics for the Greeks (I like the sound of that). 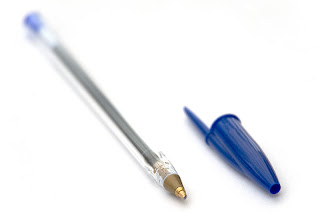 Photo Bic by Trounce
Many a time the blue top of the plastic tube, designed to keep the ink holder in place, was removed by means of teeth action. It was a hard task. Some teeth got broken in the process. The tube itself was cracked, subjected to heat experiments, or crushed by careless feet leaving the bendable ink holder exposed like some defenceless worm creature out of its shell. The creature would refuse to write thereafter. If you decided to cut it in pieces, no ink would issue forth.

In cold weather there was this thing you had to do: heat the Bic tip with your breath, then shake the whole thing as you would a thermometer. The Bics occasionally took their revenge. For no apparent reason they would suddenly die, bleeding uncontrollably in one's pencil case, on one's finished homework or a surface they knew one would lean on wearing a freshly laundered shirt. The Revenge of the Bics on the Greeks.
on February 16, 2010