"What's in a name?
That which we call a rose
By any other name would smell as sweet". 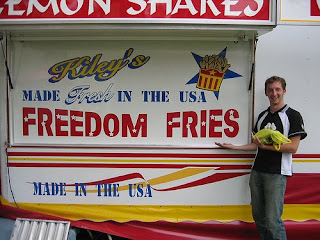 
"So Romeo would, were he not Romeo called, Retain that dear perfection which he owes Without that title". But Romeo did not think so: "Call me but love and I'll be new baptized, Henceforth I never will be Romeo. ... My name ... is hateful to myself Because it is an enemy to thee, Had I it written, I would tear the word".
The attempt to tear the word "French fries" from the American vocabulary occurred on the aftermath of 9/11 when France opposed the invasion of Iraq in 2003. Indignant US Representatives (having no regard whatsoever for Thomas Jefferson who had introduced the French delicacy in a White House dinner in 1802) wanted to ban the offending word. If the Americans' love affair with fries could not be avoided, the fries should be "new baptized". The patriotic bodies could not be seen to consume unpatriotic food. 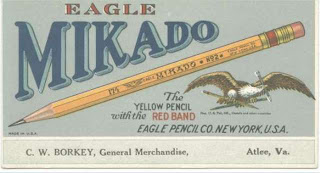 The Mikado pencil. Courtesy of The Pencil Place
How do we reclaim something that has overnight become the "other", the "enemy within". Rename it. Remove the offending sign. Reclaim it sanitized. Let French toast become Freedom Toast. Let Sauerkraut become Liberty Cabbage. The attack of the Japanese on Pearl Harbour called for a similar sanitization.
The Mikado. A Yellow Pencil cashing in on Oriental images, like the Koh-I-Noor before it. Yellow as in  oriental. Mikado as in Emperor of Japan. Japanese-like lettering. But  as soon as the Japanese attacked Pearl Harbour on the fateful day of December 7, 1941, the Mikado pencil was due for sanitization as well. No American Eagle could be seen next to a Japanese looking and sounding pencil. The country was at war. New words were needed. The Eagle Pencil Company renamed the famous Mikado into Mirado. "What's in a name?" 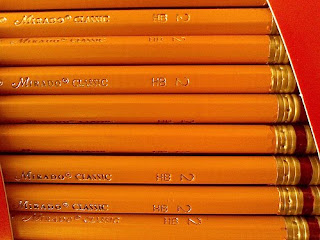 Email ThisBlogThis!Share to TwitterShare to FacebookShare to Pinterest
Labels: Mikado