The Pen is Mighter Than the Sword? Percy Jackson.

In the beginning there was Cardinal Richelieu: the world's first Prime Minister, man of power, owner of a superb manuscript collection, patron of the arts and founder of the Academie Francaise. Wait, no. In the beginning there was Edward Bulwer-Lytton. And he wrote in 1839, a play called Richelieu; Or the Conspiracy. It was opened in London's Covent Garden theatre and William Charles Macready, as Richelieu, uttered the following: 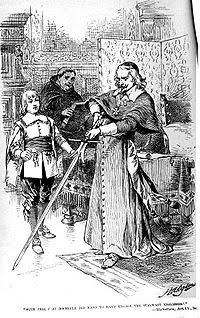 True, This! —
Beneath the rule of men entirely great,
The pen is mightier than the sword. Behold
The arch-enchanters wand! — itself a nothing! —
But taking sorcery from the master-hand
To paralyse the Cæsars, and to strike
The loud earth breathless! — Take away the sword —
States can be saved without it!
But wait! The good Wikipedia informs me that Bulwer-Lytton was not the first to compare the pen's might to that of the sword. There were others: Islamic prophet Muhammad  has reportedly said that the ink of the scholar is holier than the blood of the martyr; Spanish 16th-century chronicler, Antonio de Guevara had compared a pen to a lance, books to arms and a life of studying to a life of war (I like that); Shakespeare had Hamlet proclaim that "many wearing rapiers [i.e. swords] are afraid of goosequills"; Thomas Jefferson compared the pen with the sword in a letter to Thomas Pain in 1792; the great man Napoleon Bonaparte himself is reported to have said that "Four hostile newspapers are more to be feared than a thousand bayonets". 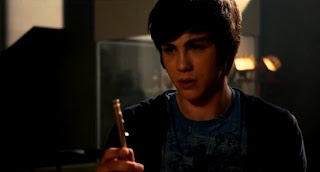 "This is a pen". Photo in fanpop
And now prophets, chronicler, men of letters and men of war have passed the pen relay to teenage demi-god hero, Percy Jackson. In the teen kitch flick, Percy Jackson and the Lightening Thief, the hero having learnt that he in fact is the son of Poseidon is given by Chiron (Pierce Brosnan in a wheelchair) a weapon to defend himself against all evil that is about to break loose. And lo! it's a pen.
Chiron: Use this to defend yourself. It's a powerful weapon
Percy Jackson: This is a pen.
Chiron: Only use it in times of severe distress.
Percy Jackson: This is a *pen*
This is a pen sound bite  Logan Lerman sound bites

A pen that in times of severe distress is transformed into a sword. Reversing centuries of tradition, demi-god Percy Jackson hailing from the legendary shores of Hollywood in the company of oversized Greek gods dressed in ancient souvenir garb and residing in Olympus (none other than the Empire State Building) proves once and for all that indeed the sword *is* mightier than the pen. And he saves the world. Like a true American.

You can buy it and see for yourself. 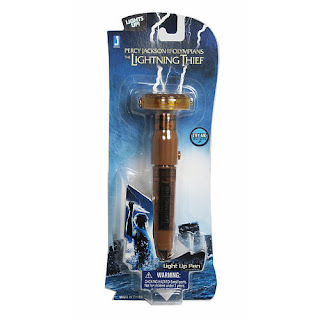