The Red Pencil: Chekhov and Censorship

The red pencil of censorship has a long history in Russia. Tsar Nicholas I's censorship measures in the context of his "Autocracy, Orthodoxy and Nationality" were notorious and although these were abolished by his son and successor, Alexander II, it wasn't long until the red pencil's reign returned. Following an attempt on Tsar Alexander II's life, censorship returned to Russia, and after his assassination, his son Alexander III (r. 1881-1894) intensified it. The security police, the infamous Okhrana, reigned supreme and those who did not conform were persecuted. 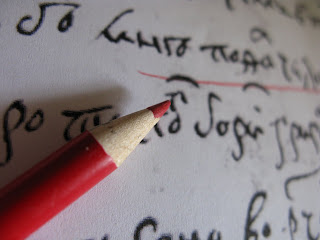 In 1889, Anton Chekhov writes to Anna Yevreinova, the publisher of Northern Herald, with whom Anton exchanged an affectionate and humorous correspondence:

Yesterday I finished and made a clean copy of a story, but it's for my novel, the project that is presently taking up all my time. Oh, what a novel! If it weren't for the accursed censorship situation, I'd promise it to you for November. There's nothing in the novel inciting anyone to revolution, but the censors will ruin it anyway. Half the characters say, "I don't believe in God," it has a father whose son has been sent to life-long forced labor for armed resistance, a police chief who is ashamed of his uniform, a marshal of the nobility whom everybody hates, etc. There's a wealth of material for the red pencil. 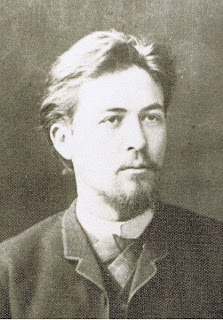 Anton Chekhov, 29 years old, 1889
Photo from The Great Soviet Encyclopedia
Of course to be censored by the "red pencil" was also an honour. One of the Northern Herald contributors resigned on November 1889 because the government censors did not mark any part of his reviews with a red pencil. He felt he was losing his touch.