One day, in the village of Claquebue, there came into the world a mare who was green. Not the washed-out green of decrepit, white-haired old hags, but a pretty jade green. Upon seeing the creature appear, Jules Hadouin could scarcely believe his eyes, nor the eyes of his wife.

Marcel Aymé, The Green Mare
Aymé was not born with pencil and pad in hand, writes J. Robert Loy. But "from his subtly destructive pen escape only those two unspoiled realities - childhood and frank physical desire. Their interreaction would seem to be his ultimate truth". La Jument Verte, or the Green Mare, is considered to be Aymé's  masterpiece, a Rabelaisian fantasy with a green mare Robert Loy calls "a priapic goddess". 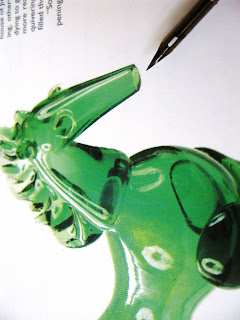 Wallace Fowlie comments that Aymé's art has a Rabelaisian tendency toward the obscene and the lusty. Sex is fun for Aymé; it is frank and Rabelaisian, says Loy. "His pen was a magic wand able to summon up magical kingdoms, realms where animals and young girls flourish, love one another, and sing in dream landscapes", writes Prouvost d' Agostino. The Green Mare made Marcel Aymé famous in 1933:
A green mare was a great novely, there being no known precedent. The thing seemed remarkable, for in Claquebue almost nothing ever happened. There was still talk of how Maloret deflowered his daughters, but after a hundred years the story had lost interest; the Malorets had always used their daughters thus; people were used to it.
Aymé kept a green glass mare on his desk until his death. Another writing implement of note. 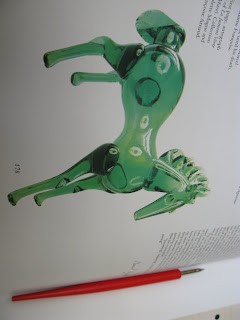