Ink and Blood, Fishbones and Toothpicks 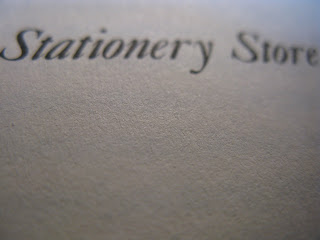 Inside the Japanese stationery store, Mr Roland Barthes ponders on the writing instrument that produces the sign: the instance when the hand encounters the instrument and the substance of the stroke, the trace, the line, the graphism. The American hand must have all the commodities necessary to record the products of the mind. Supplied by an abundance of implements, the American hand writes in comfort. No endeavour, no "pulsion", no stroke. The French is the master calligrapher and eternal copyist. The Japanese is gesturing - the brush, as if it were the finger, slides, twists, lifts off - it has the carnal, lubrified flexibility of the hand. 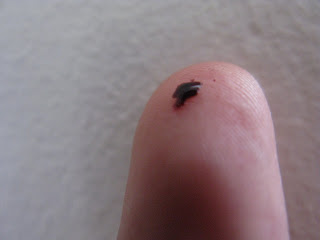 The fictional hand writes in its own blood. No brushes are used, no twists employed. But what more carnal, more lubricated than ink blood. In his dismal prison of Château d' Il, Abbé Faria in Dumas' Monte Cristo "pricks" his finger and dips his fish bone pen in his blood "for particular notes that must stand out from the text". Augustus in Edgar Allan Poe's Narrative of Arthur Gordon Pym of the Nantucket is more dramatic. An old toothpick is made into a pen and a "slight incision just above the nail"  produces a copious flow of blood. There is a mutiny in progress, Captain Barnard was set adrift, this is no joke and this no ordinary ink coming from the comfort of my home: "I have scrawled this with blood - your life depends upon lying close". 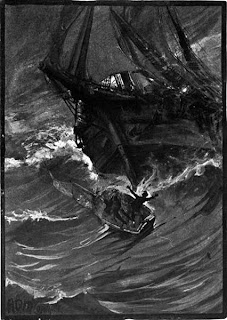 Ink and Blood, or The adventures of the fictional hand
from Poe's Narrative of Arthur Gordon Pym
There is an urgency in the fictional hand. No comfort, no calligraphic labours, no strokes, no glissade. It cuts its own pens, makes its own ink, feeds on its own blood.
Roland Barthes, Empire of Signs, trans. Richard Howard, New York: Hill & Wang, 1982; Alexandre Dumas, The Count of Monte Cristo, first published 1844-5; Edgar Allan Poe, The Narrative of Arthur Gordon Pym of Nantucket, first published 1838. On my finger there's actually Winsor and Newton Deep Red Ink.
on March 20, 2010