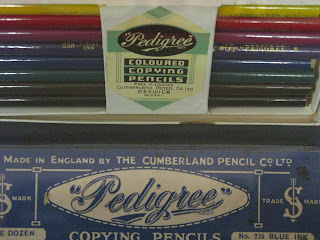 Copying pencils were first introduced in the 1870s for use in the letterpress copying process. They produced writing more indelible than the regular graphite pencils because they contained aniline dyes. Copying pencils were used in James Watt's wet transfer copying process in the 1870s and later in the hectograph (1880) and spirit duplicator (1923). For all you ever wanted to know about copying pencils but you were afraid to ask Read The Copying Pencil: Composition, History, and Conservation Implications in The Pencil Pages.


See also the extensive The Hidden Life of Copying Pencils by PencilTalk.
on April 11, 2010