The marvels of Google News: I came across this article from The News and Courier CHARLESTON EVENING POST, vol. 3, No. 41, 16 January 1977. Associated Press Special Correspondent Hugh A. Mulligan (1925-2008) interviews Vladimir Nabokov in Switzerland, where the novelist lives in "lonely luxury in a deluxe hotel suite overlooking Lake Geneva since 1961".
Contrary to the fame of Lolita, Nabokov professes himself to be "obscure, doubly obscure novelist with an unpronounceable name". Nabokov does all his writing in pencil, reports Mulligan, on large index cards while standing at a lectern "which faces a bright corner of the room instead of the bright audiences of my professional days".
He doesn't belong to any club or group, he says. He doesn't fish, cook, dance, endorse books, go to church, go to analysts or take part in demonstrations. He may well be one of Tony Judt's Edge People:

I am an American writer, born in Russia and educated in England where I studied French literature before spending 15 years in Germany. 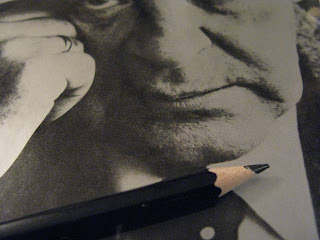