The Pen of Thomas Mann

Working without pen and ink is something one scarcely dares to call "work", even to oneself,

writes Thomas Mann to his brother Heinrich on December 29, 1900. The author of the Magic Mountain used to work almost exclusively in the morning hours, from 9 to noon, or 12:30 producing one and a half manuscript pages, as he writes to Austrian writer and journalist, Viktor Polzer in 1940. His slowness he attributes to "severe self-criticism", and the high requirements of form but also to

the "symbolic content" of style, in which every word and every phrase counts, for one never knows what part one's present phraseology may have to play as a motif within the total work.

Thomas Mann writes to Polzer that he works by himself and writes by hand using "what is here called a desk fountain pen instead of the steel nib". Perhaps he stopped using a steel nib in 1907 when he writes to his brother: "I can't be very coherent (we are breaking up our household here, now reduced really to complete disarray and I'm writing with a fountain pen I'm not yet used to)". But who knows? 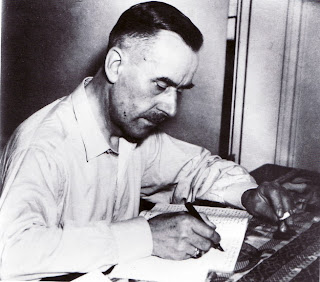 Thomas Mann and his fountain pen, ca. 1939
Mont Blanc has produced a Thomas Mann fountain pen as part of its Writers Limited Edition, inspired by Mann's masterpiece Buddenbrooks. InkyJournal has got a review with excellent photos too.