The Stabilo pointVisco: A Touch of Gene Kelly 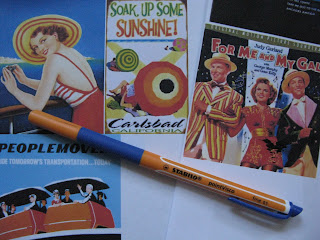 I do not know what to think about the Stabilo pointVisco fine 0.5, blue. The wise Pen Addict has already pointed out that "fine" it is not. The ink does flow smoothly though and it is comfortable to hold. But there is something else about this pen. Something vintage - a touch of old-time beach holidays, a touch of Gene Kelly perhaps. It is, I think, the choice of the orange and yellow stripes (a staple design in Stabilo) that carry the look. Stabilo point88 have them too. But pointVisco goes on step further.

First of all the orange/white stripey look is combined with what I call "school-boy blue". It is the sensible blue that one finds in old school exercise books - an unimaginative, stale, obedient blue. It is found in the rubber grip and on the top end of the Stabilo and on the pocket clip. Both ends of the pen are at an angle (at opposite angles to each other to be exact) and there would have been hollow had it not been for the Stabilo Swan logo protruding from within.

And now come the stripes - Stabilo pointVisco's pièce de resistance.  Because forget about your usual Stabilo stripes. These new ones are moulded affairs that not only emulate the pencil (nothing new there, all hexagonal pen designs, starting with Bic, emulate the pencil) but touch on the monumental. An undulating surface of sunny orange accentuated by an oval shaped white border. Ancient columns come to mind. 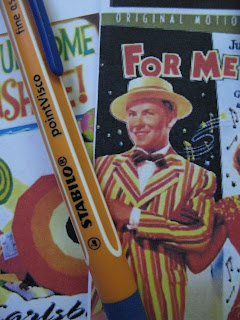 Where Gene Kelly fits into all this? Well, Stabilo pointVisco is playful in a vintage way. Playful in a wholesome way - the type of playful that dressed in a tailored pinstripe suit would break into song in the middle of the seaside promenade. It would do a little exquisite dance while the ladies have ice cream on the pier, it would smile a white-tooth smile while effortlessly gliding by. 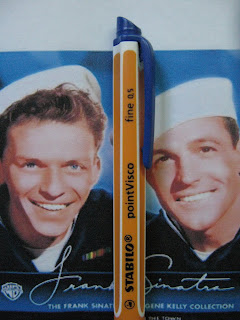 Email ThisBlogThis!Share to TwitterShare to FacebookShare to Pinterest
Labels: Stabilo