Preserved in museums, displayed in glass cabinets of historic homes, the writing instruments of famous personages have none other value intrinsic to them than the value endowed on them by a public hungry for relics. Relics are proof that the past existed. The irretrievable magic of the past is locked in objects. The perceived genius of its past owner is passed onto the quill, the fountain pen, the inkwell, the portable writing desk. Objects stand dead behind glass or on pedestals, untouchable and sacred, carrying portable meanings that await to be unlocked. Objects are brought to life by meanings.

Thomas Jefferson was aware of the power of relics. Jefferson designed a mahogany lap desk which was  built for him by Philadelphia cabinet maker Benjamin Randolph. On it the third President of the United States composed the Declaration of Independence. He later gave it to his granddaughter's husband, writing on November 1825:

Politics, as well as Religion, has its superstitions. These, gaining strength with time, may, one day give imaginary value to this relic, for its association with the birth of the Great Charter of our Independence.


no longer inanimate, and mute, but something to be interrogated and caressed. 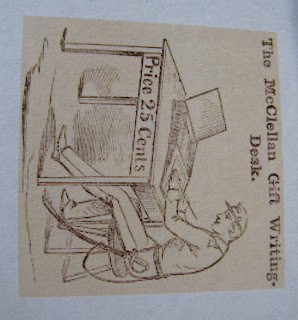 Source: Library of Congress online exhibits. The portable writing desk is held in the National Museum of American History, Smithsonian Institution.
on July 18, 2010