Thomas Jefferson: The Pen and the Polygraph 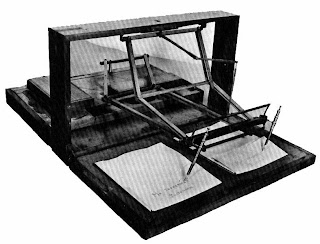 Amy McDonald is Archives Assistant in Duke University Archives and author of Devil’s Tale, the blog of the Rare Book, Manuscript and Special Collections Library at Duke. The blog is a delight to read for the archives enthusiast. Amy kindly informed Palimpsest of another “writing instrument” made famous by its user, Thomas Jefferson (1743-1826), the third President of the United States (1801-1809): the polygraph.
Devil’s Tale reports on the visit of Francis Calley Gray to Monticello and the welcoming dinner and tour of the library the guests enjoyed under the guidance of Jefferson. Gray concludes his narration to the visit to TJ’s library with: “Mr Jeff took us from his library into his bed chamber where on a table before the fire stood a polygraph with which he said he always wrote.”
Jefferson writes to Volney on February, 8 1805:

Our countrymen are so much occupied in the busy scenes of life, that they have little time to write or invent. A good invention here, therefore, is such a rarity as it is lawful to offer to the acceptance of a friend. A Mr. Hawkins of Frankford, near Philadelphia, has invented a machine, which he calls a polygraph, and which carries two, three, or four pens. That of two pens, with which I am now writing, is best; and is so perfect that I have laid aside the copying-press, for a twelvemonth past, and write always with the polygraph.

I believe that when you left America, the invention of the polygraph had not yet reached Boston. It is for copying with one pen while you write with the other, and without the least additional embarrassment or exertion to the writer.

I think it the finest invention of the present age, and so much superior to the copying machine, that the latter will never be continued a day by any one who tries the polygraph.

Knowing that you are in the habit of writing much, I have flattered myself that I could add acceptably to your daily convenience by presenting you with one of these delightful machines. I have accordingly had one made, and to be certain of its perfection I have used it myself some weeks, and have the satisfaction to find it the best one I have ever tried; and in the course of two years' daily use of them, I have had opportunities of trying several.

As a secretary, which copies for us what we write without the power of revealing it, I find it a most precious possession to a man in public-business. 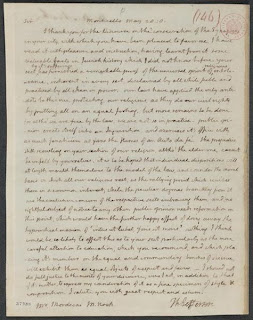 Despite his dedication to his polygraph, Thomas Jefferson had had a pen specially made. It was (the Library of Congress website informs) a small cylindrical silver fountain pen with a gold nib with an elliptical cap that screws into the end of the cylinder and caps the ink reservoir. It was probably made by William Cowan and is engraved TJ. The pen of Thomas Jefferson is held in the Monticello Thomas Jefferson Memorial Foundation.

See a modern production of the polygraph machine here. Quotes from Thomas Jefferson, Memoir, Correspondence and Miscellanies from the Papers of Thomas Jefferson, vol. IV, Gray & Bowen: Boston and New York, 1830 (as published online by Project Gutenberg, 30 Sept. 2005). See also the online Thomas Jefferson exhibits in the Library of Congress.