Gandhi, his Pencil and Mont Blanc

Take the Marcel Proust fountain pen for example: a 925 sterling silver affair with a Rhodium-plated 18-karat gold nib to commemorate an author who did not care for exquisite writing implements and preferred to use the cheapest Sergent-Major nibs. Or the equally expensive, engraved, gold plated Mont Blanc pen, named Hemingway. Hemingway had a penchant for pencils.

And then Mont Blanc set its gaze upon Gandhi. Mont Blanc has lavished a multitude of symbols upon the Gandhi Limited Edition pen: the symbol of Indian independence, Gandhi's spindle, has inspired the top of the cap and the cone; the colour white symbolises peace and truth; the Mandarin garnet represents the colour orange of the Indian flag. Issuing a limited number of 3000 pens for the Mahatma Gandhi Limited Edition represents the three thousand people who followed Gandhi. For the buyers of the Limited Edition 241, there comes a surprise: an eight-metre golden thread wound around it. 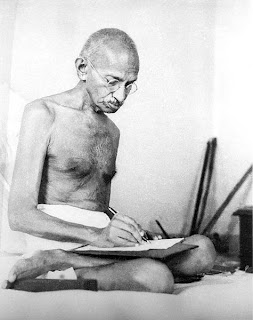 Mont Blanc ran into legal troubles over the use of Gandhi imagery which Shekhar Hattangadi explains in "A Pen-ny for Gandhi's Thoughts". The disparity between Gandhi's preferred writing instrument and the Mont Blanc pen is again astounding. The man was aware of the meanings endowed even to objects of everyday use and the objects' place in the wider context of ideology. A proponent of the oppressed and downtrodden Gandhi used the humblest of pencils and reed pens, and the cheapest of paper. Hattangadi writes that Gandhi

once asked his grandson Arun - then a toddling school kid - to retrieve a used pencil from the street where the latter had discarded it, because it had not yet been reduced to a tiny stub and so could be used some more.

For Gandhi, every little aspect of the process was as important as the final product... which is why one of the 20th century's greatest politicians routinely wrote letters - some conveying momentous and historic decisions - on scraps of paper, including the backs of used envelopes.